Free Samples of a Sleep-Deprived Brain

Time to Chop Some Names

Recently, Jason Collins became the first current player in America’s major sports to come out as gay. With that cultural marker now past, a lot of attention is turning to racially sensitive sports nicknames as the next hurdle to clear.

Daniel Snyder’s comments saying the Washington Redskins would never change their nickname may be popular and based in team history, but the statement is a dumb one when you look at the bigger cultural picture.

Let’s start by stating one absolute, obvious fact. The nickname is racist.

Let’s follow that by stating an absolute, obvious observation. Americans don’t do the racist thing anymore, at least not in public. Unless you’re the Redskins and a handful of other college, high school or youth-level athletic programs who haven’t gotten with the program.

Over the past 20 years, names with Native American ties — some honorable, some questionable, some blatantly derogatory — have disappeared. In the cases of the derogatory, congratulations were deserved for leaders recognizing the negative impact of those names and working to remove them.

In some cases, the logos were just as offensive as the names. Witness the dopey caricature fostered by the St. John’s Redmen as Exhibit A: 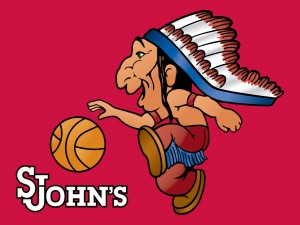 While the Redskins catch the most flak for their stubbornness on this matter, other teams still aren’t immune for legitimate criticism. Not so much for the nickname as for the logo or team’s visual identity.

This was borne out during Major League Baseball’s spring training, when the Atlanta Braves broke out the Way Back Machine and returned with hats emblazoned with Chief Nokahoma.

I have always been ambivalent about Nokahoma. It’s a much more accurate picture of a Native American than, say, the Redmen logo or Cleveland’s Chief Wahoo…

…but there’s something unnervingly wrong about the logo that I have never been able to place.

And don’t get me started on Chief Wahoo. That branding campaign should never have been launched.

I do have a problem when nicknames are blatantly offensive but still widely supported.

When Americans look back at the 1800s and think of Native Americans, they think cowboys and Indians, Custer’s crew wiped out at Little Bighorn and (possibly) reservations. We give lip service reverence to the individual giants like Sitting Bull, Crazy Horse of Chief Joseph. As a culture, though, we totally have blocked out the treaty upon treaty broken to gain land. And aside from Wounded Knee, S.D., we turn a blind eye to massacre after massacre.

Case in point: the Choctaws were moved from Mississippi and Alabama to Oklahoma thanks to the Treaty of Dancing Rabbit Creek in 1830. Choctaws were given a choice of submitting to U.S. laws or keeping their legal structure and moving — and giving up some 11 million acres of land in the process. The treaty was the sixth one involving both parties in some capacity, each meaning huge chunks of territory were handed over as settlers demanded more and more land (this started well before the Treaty of Hopewell in 1786, which among other things said Americans could never live on Indian land and Indians could punish violators as they saw fit. We see how well that went over.).  The Treaty of Doak’s Stand in 1820 said boundaries wouldn’t change until the Choctaw were “civilized and enlightened” to become U.S. citizens…only to see the boundaries change with the Treaty of Washington City in 1825 and complete removal in 1831.

Back when I was a kid and John Riggins became a household name against the Dolphins, I wouldn’t have cared. Now, when I hear Daniel Snyder’s comments, Snyder’s in-your-face defiance, this litany of disrespect is what comes to mind. Not fourth-and-six from the other team’s 18 with under two minutes to go and trailing by a field goal.

No gathering of 50,000 to 80,000 people chanting and waving the Tomahawk Chop will ever honor the deaths incurred at Wounded Knee or Sand Creek or the displacement of thousands of people thanks to Dancing Rabbit Creek and other similar threads of broken treaties woven into a quilt of nationwide marginalization. Snyder’s dismissive comments continue that marginalization, whether he sees it or not.

So many things are considered offensive these days, and when those concerns are voiced, we take steps to make amends. Except, inexplicably, in this case and with this segment of humankind.

The Redskins name is racist and has to go. People adjusted to talking about the St. John’s Red Storm instead of the Redmen. We can think of another suitable nickname for the Washington Redskins.

Looking deeper, though, what a lot of us need to consider is whether the push towards tolerance includes Native Americans as well as most of the rest of humanity. The fact we’re having this discussion indicts us. It says we’re not where we should be as a culture even though other landmarks are now past.

By day (and often by night), I'm the news director for a small-market cluster of family-owned radio stations. I'm blessed to have a great wife and four amazing children. I enjoy music, writing, a variety of sports, stormchasing and...believe it or not...naptime.

One thought on “Time to Chop Some Names”

The (not necessarily) News from the North Pole

Just a 20 something year old wanting to be heard.

The (not necessarily) News from the North Pole

Just a 20 something year old wanting to be heard.

Poems and stories of love & heartbreak.

Free Samples of a Sleep-Deprived Brain